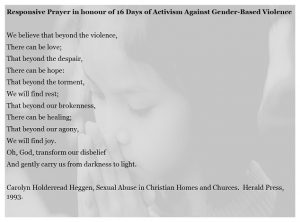 16 Days of Activism Against Gender-Based Violence is an international campaign to challenge violence against women and girls. The campaign runs every year from November 25, the International Day for the Elimination of Violence against Women, to December 10, Human Rights Day. It was initiated in 1991 by the first Women’s Global Leadership Institute, held by the Center for Women’s Global Leadership (CWGL) at Rutgers University.

In 2019, the UNiTE campaign will mark the 16 Days of Activism against Gender-Based Violence, from 25 November to 10 December, under the theme, “Orange the World: Generation Equality Stands against Rape!”