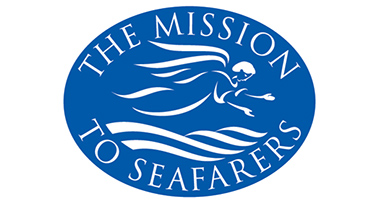 In order to be easily recognized in a busy Toronto coffee shop, Reverend Judith Alltree is wearing her clerical collar. It is not something she wears when she is on a ship because it can be a barrier between her and non-Christian seamen or Christians whose tradition does not include female clergy and inhibits her humanitarian mission to seafaring men and women. Vast expanses of water do inspire a spiritual outlook but it is the isolation and vulnerability that is the focus of her work. Within this environment Judith wants to encourage trust. Ships are also dangerous workplaces making Judith’s choice to wear a safety vest and a hard hat with a cross in duct tape on the front more practical.

The logo for the International Mission to Seafarers is a flying angel on a blue ground. In keeping with that winged image, as the part-time executive director of the Mission to Seafarers of Southern Ontario, and as chaplain for Oshawa and Toronto, Judith shuttles between the ports of Toronto and Oshawa, and oversees operations in the Hamilton Mission. The vessels plying the Great Lakes do not dock in Toronto as much as they used to but Hamilton is very busy and the harbour in Oshawa is increasingly so.

Judith will add a trip to the Philippines to her tour this fall. She will be in Manila to take a course on how to care for Filipino seafarers because 37.9 percent of all seafarers are Filipino. The salient point of the World Day of Prayer 2017, written by the World Day of Prayer Committee of the Philippines, is that the Philippines’ major export is its people who often encounter exploitive situations. Seafarers are also overwhelmingly men. Most have the rank of able-bodied seaman or AB meaning they are qualified to do the general work of a ship. There are few women working at sea and most of them are officers. Change comes slowly to this industry with long-standing traditions.

Seafaring may sound like an anachronism but it is still very much a part of our lives. Expressions brought ashore by seafarers in the days of sail like “by and large” and “pass with flying colours” are common enough but, like the goods in our stores and supermarkets, we seldom think about their sea-going past. Shipping goods between continents usually does involve ships. It is surprising to hear that shipping is one of the greenest ways available to move goods. One bulk carrier on the Great Lakes can move 600 trucks’ worth of goods. It’s the kind of fact that Judith has at her fingertips to help people understand the scale and importance of seafaring.

The Seafarer’s Mission grew up around the extreme isolation and vulnerability of seafarers. They would be paid off when they left the ship. Their pockets full of pay and their families distant, they would fall prey to quinks. A quink was a person who enticed seaman fresh off the boat and waiting to be paid off to enjoy drink, lodging and other amusements on credit.  The bill would tend to match whatever pay the seaman had. With no money left to forward to his family and no money to make a trip home, the seaman would have little choice but to return to sea.

This miserable cycle caught the attention of Reverend John Ashley who founded a mission to serve seafarers in Bristol, England. The mission was to provide seamen shelter, food and the opportunity to use their pay to support their families. Twenty years later, in 1856, the Mission to Seafarers was founded. It is a worldwide society of the Anglican Church and officially the Seafarer’s Mission is 160 years old this year.

Despite technological advances and having larger modern ships on which to serve, some of the same issues that inspired Reverend Ashley to begin ministering to seafarers 180 years ago persist. As Judith points out, the sea inspires spiritual reflection but a modern ship is relentlessly noisy with the sound of engines and the crashing of waves. Seafarers may spend between six and eleven months at sea with no way to reach family members, living at the mercy of the weather and the ship owners. One of the most important things Judith can offer them is as simple as a quiet place, but even that can be out of reach at times. Crews can find themselves caught in the middle of disputes between ship owners and port authorities, trapped aboard a vessel in need of repairs because an owner has not paid the bills.

A ship can be owned by one company, chartered by a second and leased by a third. It may also sail under the flag of a country that is a signatory to the Maritime Labour Convention (MLC) or under a flag of convenience. The flag of the country under which a vessel is sailing determines the law aboard the ship while it is at sea. On a ship sailing under the flag of a signatory country, the MLC rules apply. The laws of the port in which you are docked apply while your ship is docked. To add to the complexity, the crew is usually hired by a crewing agency. Caught in these layers of jurisdiction and regulation, the crew is vulnerable to abuse and exploitation.

In the summer of 2014, the crew of the MV Fritz was told they could not go ashore because they were without proper visas. The problem was not with their visas, rather the owners had stopped paying the bills that allowed their ship to dock in Canada. The ship was also in need of repairs, which would have to be carried out in Hamilton. Unable to dock, their food and water dwindled until it would only last for one more day when the Hamilton Harbour master brought the ship to port in Oshawa as a strictly humanitarian gesture to get the crew to shore.

Unpaid and unable to discharge their cargo, the crew had to wait in Oshawa for three weeks until the ship could go to Hamilton to be repaired. At the time, Judith was working to help the stranded crew with the help of Oshawa citizens. She later met the captain from the Fritz and was shocked to see that his eyes were bright blue because they had been grey during those stressful days.

Sometimes it is the seafarers themselves who are making humanitarian gestures. SOLAS stands for “Safety of Life At Sea” and refers to the obligation of seafarers to respond to calls for help at sea. At sea there is no choice when someone is in trouble. The nearest ship must respond to a distress call even if the attempted rescue means risking and encounter with pirates. Piracy is not the only unsavoury activity going on. Human trafficking, as the death toll on the Mediterranean attests, is a booming business. Judith shared a harrowing tale of rescue as told to her by Captain Joshua Bhatt.

Captain Bhatt was sailing the CS Caprice in the Mediterranean. The ship was just starting its voyage so the food and water aboard was plentiful. When a rescue call came about a small vessel carrying over 500 people heading into a major storm, Captain Bhatt responded. Despite his warning about the approaching storm, the traffickers resisted the Captain’s pleas to come alongside the Caprice until they were granted a guarantee they could drop their passengers in Italy. It took precious hours for the guarantee to work its way from Italy to the traffickers. Finally the traffickers brought their vessel alongside and its passengers—men, women and children— made the dangerous climb up the side of the Caprice on the pilot’s ladder. Just as the Caprice threw its last lifejacket to the smaller boat and the lines were cut loose, the weather turned.

One very ill refugee was airlifted off the Caprice but they fed and tended their remaining 499 guests for three days and spent five days cleaning their ship after their guests were safely delivered to Italy. As an indicator of such rescues to commercial shipping, Judith estimated the fuel bill for a ship like the Caprice would be $900,000. The cost of supplies and time spent going off course in order to rescue people from the Mediterranean must also be factored in. What goes uncounted is the price crews pay after the trauma of pulling people and bodies from the sea. Drawing from her earlier career in travel, Judith says the evidence of failed crossings by refugees and migrants is a good reason for cruise ships to stay out of the Mediterranean this year.

Seafarers can also be under strain from their long voyages and isolation from loved ones. It can be hard on family relationships to be separated for such long spans of time. What the seafarers want most when they come from the Seafarer’s Mission is a way to contact loved ones at home. Communication is a vital to maintain relationships but it is not easily available at sea. Satellite communications can be used but they are very expensive and many seafarers are sending their money home. The seafarer may be among the few people for whom the world remains vast.

Kathryn Tate is WICC’s communications coordinator. She lives in Toronto, ON.