We are continuing our series of We-Connect interviews by featuring Agnes Bregman of Teeswater, ON.  Learn more about this terrific long-time supporter of World Day of Prayer through a May 2019 question and answer series between Agnes and Janet MacFadyen.

Janet:  Hello Agnes.  Thank you for speaking with me today.  Could you tell me a little bit about yourself?

Janet:  When did you get involved in World Day of Prayer?

Agnes.  I’ve been active in World Day of Prayer, WMS and church for many years. My husband (Robert) and I have belonged to Presbyterian churches in three towns:  Norval – for a short while, Langside – which is now closed, and now Knox in Teeswater

Janet:  Agnes, I understand that your first World Day of Prayer service was in Canada.  Why do you think people attend this event?

Agnes:  I think it depends on how active people are in their churches.  We are fortunate in Teeswater that our Catholic, Presbyterian and United churches work together well as a group each year to organize World Day of Prayer.

Janet: Do you have any favourite World Day of Prayer memories?  Any years that stand out?

Agnes:  All of the years are interesting.  I enjoy learning about the countries, and in the scrapbooks I keep, I usually include the World Day of Prayer programs.  One special thing that we did in Teeswater was create a banner that travels from church to church for World Day of Prayer.

Janet:  I would like to see that banner.  I wonder if anyone has a picture.  I’ll check on that possibility.

Agnes:  Yes.  Someone might have a picture.  We also usually have a choir from the three churches to practice the new music.  Often my husband and I have been choir members.

Janet:  That sounds wonderful, Agnes.  Were you ever a coordinator for World Day of Prayer?

Agnes:  I was not a coordinator but assumed roles based on whatever our organizing group determined what needed to be done.

Janet:  Does the organizing group have any particular challenges when it comes to World Day of Prayer?

Agnes: Some countries are easier than others in terms of finding decorative materials.  I had a wooden shoe and “fake” Dutch district attire when it was needed.  Not everyone will have these.  We often make do with what we have at home.

Janet:  Have you noticed any significant changes to World Day of Prayer over the years?

Agnes:  They were so gradual that I didn’t particularly notice.  It depended on who was in charge.  I do know that our services are better attended in the afternoon.  It’s always on the first Friday in March.  It would only be moved for a funeral.

Janet.  I understand.  Various communities try different dates and times to suit their needs.  The Women’s Inter-Church Council of Canada lets coordinators know that they can change the date from the first Friday in March if it is a better fit for weather or other conditions.

What do you think keeps World Day of Prayer vital, Agnes?

Agnes:  The ladies that look after World Day of Prayer do what they can to make it interesting.  Everyone is involved.  It is a good opportunity for fellowship.

Janet:  Do you think that the organizing group was satisfied with the WDP materials provided by WICC?

Agnes:  Yes.  We are always pleased with the service, and usually only use the materials provided by WICC.  The whole 2019 program was very good. I like to read the grant stories. We used the devotional DVD this past year so didn’t need to find a speaker. Usually we have a speaker if we know someone from the host country.

Janet:  I do as well.  Finding a speaker can be a challenge sometimes and I am glad that the devotional video worked well for your service.  WICC is working on WDP 2020 materials right now.  A two-page summary of 23 grant story highlights has just been reviewed.  As well, longer versions about recent grant recipients are being prepared for the WICC website:  wicc.org.  They will be available soon.

Has your community ever applied for a World Day of Prayer grant?

Agnes:  No.  I don’t believe that we have prevalent social injustice issues in the community that would require us applying for a grant.

Janet:  WICC invites those interested in grants to check the application and deadline on wicc.org. Agnes, do you think that families pray?

Agnes:  Religion may not be on the horizon for families.  All consuming thoughts are on today.  Kids who went to Sunday School are not continuing on as church members.    I went to both Christian elementary and high schools in Holland.  I wonder about the benefits of having religion removed from public schools.

Janet:  I think that there will be a shift back to the churches.  People will find that they need a greater common spiritual community.  That is one of the reasons I promote World Day of Prayer.

Agnes, I know that you are very involved with your church.  Could you tell me a bit more?  I know that our readers will relate to you, and be interested.

Agnes:  We joined Knox Presbyterian in Teeswater in 1974.  Another lady and I were the first female elders, and eventually I served as Clerk of Session for 12 years.

Janet:  That is impressive, Agnes.  I remember those days.  My mother was one of the first female elders in our Presbyterian Church.  When she was first asked, I think that my father wasn’t encouraging.  However, when we were teenagers, we backed her interest, and told her to go for it.

Agnes.  My husband was always supportive of my roles.

Janet:  This is good to hear. Tell me more about your church life, please.

Agnes.  Knox Teeswater church had a very active WMS for which I have been the president and treasurer.  As well, I was a council executive for the Maitland Presbyterian Synod. And for 30 years, I have been the Ladies’ Aid secretary.  I always enjoyed it!

Janet:  Agnes, I believe that you have made significant contributions to your church and your community.  Any last thoughts about World Day of Prayer for our readers?

Agnes:  World Day of Prayer is an important part of the Christian church.  It’s important for getting the churches working together.

Janet:  Thank you, Agnes.  I think that is an excellent way for us to end our conversation.  Take care. 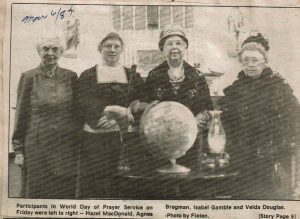 Thank you to Sharon A. McDonald of Teeswater United Church for providing this picture.

2 comments on “An Interview with Agnes Bregman”