If you do an internet search for baking recipes from Wales, Welsh cakes are what comes up. This recipe is a combination of four recipes that I found. The pan must be hot before you add the cakes. They are a little crumbly when you remove them from the heat but set up nicely after a minute or two. 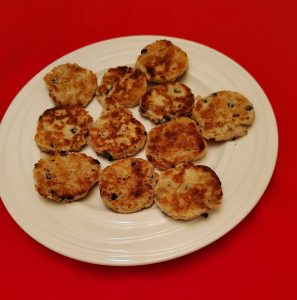 Stir together flour, sugar, cinnamon, mace (or nutmeg), baking powder, and salt in a bowl. Mix in the butter and lard using a pastry cutter, your fingers, or a food processor until it looks like coarse crumbs. Stir in currants. Set aside.

Combine egg and 2 teaspoons water and beat well. With a fork, stir the egg mixture vigorously into the flour until you have soft dough. Add another 1 to 1½ teaspoons of water if dough is not holding together.

Heat a heavy frying pan to medium hot. Grease with lard or oil. Cook Welsh cakes for about 3 minutes per side. Welsh cake should be golden brown, crisp, and cooked through. If needed, adjust temperature. Remove to a plate and allow to cool a little.  Serve warm or cool. Makes 25 cakes.

One comment on “Baking with Nancy – WDP 2022 – England, Wales and Northern Ireland!”