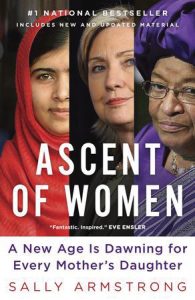 By the cover, with the photos of three strong and articulate women: Malala Yousafzai, Hillary Clinton and Ellen Johnson Sirleaf, you assume this was a feel-good book about the progress of women around the world. But turn to the first page which is titled “Praise for Ascent of Women” and within the praise is a warning of the graphic and disturbing narrative. Indeed some descriptions were so violent that I had to stop reading and return to the book later. This made for a difficult read but a must read.

The gruesome facts point to the terror that women have been subjected to around the world in the past and not-so-distant past. The author used Canadian references to drive home her point that the Declaration of Human Rights was written 1948, but equality in the home and workplace did not follow. It has been a fight within our country to make the declaration work for all human beings. The abuses done to women in the name of family, religion and culture, especially in the private sector, have been hidden and the violators have not been held accountable for their actions.

The second wave of the Women’s Movement was during the 1970s when attention-grabbing marches and bra burnings resulted in the United Nations declaring 1975 “International Women’s Year” and the years 1976-1985 “The Decade for Women”. Conferences were held over the years in Mexico City, Vienna, Copenhagen and Nairobi. The Conference in Beijing in 1995 brought forth the slogan “Women’s Rights are Human Rights.”

The key to change is in communication and finding common ground between cultures. Women in Afghanistan now know that women elsewhere in the world do not suffer under tribal laws, polygamy and the indefensible treatment of women at the hands of their fathers and husbands. Change in practices is usually met with the comment, “This is our culture, our religion; it’s none of your business.” But when misogyny is passed off as “our way”, we have to speak out and denounce it as the criminal activity it is.

Honour killings come under this category of crime. Practised by Muslims, Christians and Hindus, honour killings continue under a veil of secrecy. Women who are seen as disgracing their families have to disappear. The list of offences may include not being raised correctly, being disobedient, refusing to uphold conservative family beliefs. It has happened in Canada. In Kingston, Ontario, a father, his wife and his eldest son have been tried and imprisoned for life, with no parole for twenty-five years, for the murder of three sisters and the father’s first wife. The women’s bodies were recovered from a car pulled from the Rideau Canal. Unlike in other countries, we will not look away and accept a burnt or shot woman as an accident in Canada.

Female genital mutilation (FGM) has been practised by Christians, Muslims and some Jews for over 2200 years. When asked why, the usual answer is that it is a religious requirement, but it is not mentioned in the Bible, the Quran, or the Torah. The three kinds of FGM and the pain and sexual trauma it brings are described. An interesting chapter talks about how to change the practice, not by asking why it is being done but what would happen in one’s village or community if it stopped being done. And if a group did not practise FGM, how quickly would that become the norm? What started with a play and storytelling about the people practising FGM or “cutters” in a community ended with the women of a village of Senegal bursting into shouts of, “Pak! Pak! Pak!” which, loosely translated, means “Death to the harmful tradition!” The change was not complete, but the villagers, who themselves traveled between villages promoting better health for girls and women and educating people about the harmful effects of FGM, will be the ones credited with the end of FGM in Senegal.

Acts of violence against women such as rape as war crime, rape as terrorism, and rape as a form of ethnic cleansing are discussed in the book. Silent no more, women have courageously raised their voices against their assailants and new laws have been passed. Shame is being placed where it belongs, on the soldiers, rebels and men who brutalize women.

The book also delves into the objectification of women in religious writings and cultures around the world, but there is history and hope for the future in its pages. What it stresses is the need to pay attention to the girl child. Educate her, take care of her health and feed her. The world’s economies will improve because of her. She will marry later, have fewer and healthier children. A quote from Cindy Blackstock, the executive director of the First Nations Child and Family Caring Society of Canada, “Within the hierarchy of First Nations, women have one of the most sacred roles—we are the life givers. With every generation there comes a chance to make the world anew.”