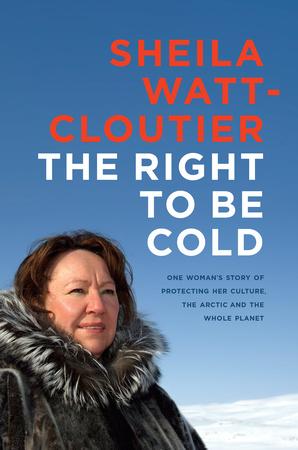 The Right to be Cold:
One Woman’s Story of Protecting her Culture, the Arctic and the Whole Planet

Lists are not the most satisfying things to read. Most leave you wanting. A shopping list is the potential for a meal, a to-do list is what you might achieve in a day, and a bucket list is a shadow of things you dream of doing. The list of Inuktitut words and their English counterparts jotted down while reading A Right To Be Cold by Sheila Watt-Cloutier is no different. It is a reminder of what was, what is and what could be, not just for the Inuit and circumpolar indigenous cultures but for everyone. What makes this book a recommended read is the reader’s myriad “aha” moments which are filtered through the layers of family and culture, the history of Canada’s Arctic, environment, climate change, and the personal experience of a woman taking part in setting policy at the local, national and international levels. As lofty as all that sounds, Watt-Cloutier relates everything back to their effects on family and  community. In doing so she reinforces that we are responsible for one another and the global importance of everything we do locally.

Local culture and language are major contributors to one’s sense of belonging. Watt-Cloutier included a number of words in Inuktitut and their English translations throughout the book. The selection of words catalogue Inuit family and community relationships and a culture bound inextricable to the land through hunting and food gathering, the creation of shelter and clothing, and the season cycle. The order in which the words appear is an account of the history of interaction between the Inuit and Europeans, the cultural and environmental changes Watt-Cloutier witnessed in her lifetime, her personal experiences as a person of Inuk and Scottish descent and the divide between the rural north and the big urban centres in southern Canada. In some cases, it was a struggle to describe concepts from the south in Inuktitut.

As a girl, Watt-Cloutier was sent south to board with a family in Nova Scotia and go to school and, as a teen, east to a residential school in Manitoba. She recounts how quickly she lost her Inuktitut language while living in Nova Scotia and her subsequent feelings of isolation as she struggled to speak Inuktitut once she was among her own people again. A list of Inuktitut words pulled from a book is only meaningful to the reader because it is a touchstone. Its significance lies in its connection to something deeper. Losing one’s language is a blow to one’s self-esteem and confidence in the place which is meant to feel most secure: home. While her experience of residential school was positive in terms of her education, Watt-Cloutier was acutely aware of the loss of the traditional education that the land had provided her and her fellow students and the lost opportunity of her community’s elders to impart this wisdom.

As Watt-Cloutier points out, the Inuit are one of the last hunting and gathering cultures on the planet. Her longing for “country food” became her easiest point of connection with her culture, eventually forming the basis of her life’s work on behalf of the Inuit. Traditional food is the only secure, readily available, nutrient-rich, and cost-effective way for northern peoples to feed themselves. Agriculture is not an option so it was a surprise to discover persistent organic pollutants or POPs from agricultural chemicals and pesticides accumulating in the fat of the animals on which they depended and in the breast milk of Inuit mothers.

Watt-Cloutier writes as an Inuk woman, a grandddaughter, a daughter, a sister, an aunt, a mother and a grandmother. Her Inuit-White heritage, her time spent boarding at school, her work in health, education, with indigenous youth, on POPs and the effects of climate change have allowed her to assemble a unique skill set. If her life could be captured in an image, it would probably be a series of bridges. Her voice and descriptions are clear and comprehensible, thanks, no doubt, to her years spent educating people about issues in local, national and international spheres. Who else would remark on the advantage of having a member of her delegation who was either pregnant or nursing a baby present throughout negotiations on POPs and their effect on mothers and infants? Living, breathing people are more persuasive than data and bring an urgency to any discussion.

It is not surprising that governments and corporations took their view of POPs and climate change from the bottom line. What was surprising was that the health of one part of the world was coming at a cost to the health of the Inuit. One pollutant accumulating in the Arctic, DDT, was being used in the south to prevent malaria deaths by spraying it on mosquitos. as much as Watt-Cloutier was advocating for the wellbeing of Inuit mothers and children by the elimination of DDT, she was mindful of the lives that same pollutant was saving in the south. She acknowledges that a diversity of interests and perspectives are at play within Inuit circles, too. Her approach to issues never homogenizes concerns or glosses over the challenges.

Thousands of years of learning from “the discipline of the land” teaches patience, according to Watt-Cloutier. Inuit observations of weather, animal migration patterns, and snow conditions are ways of knowing which must be accurate because survival hinges on such knowledge. It’s a relationship that most of us just don’t get in our highly mobile, food-secure lives in the south. Yet we are beginning to notice some environmental disruptions to the lifestyles to which we are accustomed as a result of extreme weather, power outages, massive floods and freeze-thaw cycles. With her assertion that the Arctic is the canary in the climate change coal mine, perhaps Sheila Watt-Cloutier has set the stage for the biggest “aha” moment of all.

Kathryn Tate is the Communications Coordinator for WICC. She lives in Toronto, ON.

“While climate change became the focus of much of my work, it was clear to me that a holistic approach must be taken to heal the wounds that affect Inuit communities – historical traumas; current spiritual, social, health and economic problems; and the environmental assaults on our way of life.” Sheila Watt-Cloutier