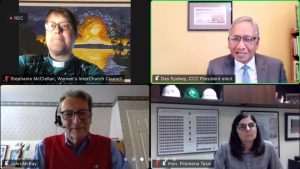 The Canadian Council of Churches (CCC) recently welcomed WICC as an Affiliate member at their Governing Board meetings. CCC is the broadest and most inclusive ecumenical body with representatives from over 25 Christian denominations and Affiliate groups.

Rev. Steph McClellan, WICC President, and Cath MacKeil, WICC Executive Director, were blessed to attend CCC meetings in late May. Highlights included a special opportunity to exchange views with the Right Honourable Justin Trudeau, Prime Minister of Canada, and other Members of Parliament during a special session of the Governing Board meeting entitled “Preparing for a New Normal: A Vision for a Just and Caring Canada”.  Other special guests were MP John McKay, the Honourable Ahmed Hussen (Minister of Families, Children and Social Development), the Honourable Filomena Tassi (Minister of Labour), the Honourable Jean-Yves Duclos, (President of the Treasury Board), and MP Rob Oliphant, (Parliamentary Secretary for Foreign Affairs).

The meetings ended with gratitude and careful hope on what the post-pandemic future may mean for the Council, our churches, and the world.

As President of the Women’s Inter-Church Council of Canada, I was blessed to sit around the table at Canadian Council of Churches as an Affiliate member.

Attending the Canadian Council of Churches’ Governing Board meeting during the third week of May was such a delightful opportunity to learn and grow and worship.

Zooming with many politicians from Parliament Hill was a highlight and it is heartening to know that the church still has the opportunity to speak truth to power and hold elected officials accountable to justice issues. It was also very affirming to hear them recognize how much work clergy and church leaders have put in while carrying congregations through COVID-19.