We have mentioned that the country of Vanuatu, and particularly the island of Erromango, plays a large role in this Pastoral Charge in that it is where the Gordon brothers – George and James, from Alberton, and as well as Ellen Gordon, George’s wife, were martyred in 1861 and 1872. More recently, descendants of those first missionaries participated in a reconciliation ceremony in 2009.  Indeed, this church, Gordon Memorial, bears the name of these martyrs.

Although we now have a very different view of what missionary work may, or should, look like around the world, there can be little doubt that the Gordon brothers and Ellen travelled to the other side of the world based on their faith. As one summary put it, “George and James Gordon spent much of their time translating the Bible into the language of the natives. Perhaps even more important was the influence of their lives and martyrdom. The light of the gospel was beginning to break, and within 25 years the island of Erromanga could be called Christian.”

What the Gordons heard of God’s word led them to act, and their actions had far-reaching consequences.  And, today, we are receiving words of Christian strengthening and guidance from those who were ministered to so long ago. 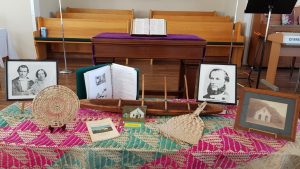 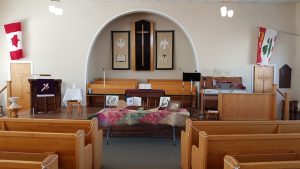 The WDP 2021 display, then, was made up of artifacts from the Gordon families, including pictures of the brothers and some articles brought back from Vanuatu when later ancestors of the martyrs returned to the islands for a reconciliation ceremony. The combination of the beautiful service written by the women of Vanuatu, and the close connection of that far away part of the world with our congregation here in PEI (indeed, some relatives of the Gordon were sitting in the pews that day), made this year’s World Day of Prayer extra special.

Thank-you for sharing this service with us!

Go to https://www.saltwire.com/prince-edward-island/lifestyles/a-journey-back-in-time-108905/ for an additional article on the Gordon families and Vanuatu.

One comment on “Excerpt from the WDP 2021 Service at Gordon Memorial United Church; Alberton, PEI”