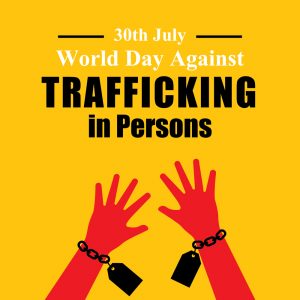 “Those who oppress the poor insult their Maker, but those who are kind to the needy honour him.” (Proverbs 14:31, NRSV.)

Human trafficking is the recruitment and control of a person for the purpose of sexual exploitation, forced labour, or debt bondage. Human trafficking deprives people of their rights, freedom, independence, and self-respect. Indeed, their very humanity is stolen.

In 1990, twenty-two people who were committed to ending the sexual exploitation of children met in Thailand. After five days of deliberation, End Child Prostitution in Asian Tourism (ECPAT) was created. Twenty-eight years later, ECPAT has expanded into a network of 104 member organizations in 93 countries to protect and support children who are vulnerable to, caught in, and survivors of sex trafficking. However, the demand for sex trafficking has also expanded. It is now an industry that exploits 21 million people (mostly women and girls) and generates $150.2 billion in illegal profits.

I recently met Timea Nagy, a survivor of human trafficking and the keynote speaker at an ECPAT conference in Winnipeg. Timea was a teenager when she emigrated from Hungary. She was promised $1000  a month to work as a nanny. However, when she arrived, she was forced into sex work. Eventually, she was able to escape. She now works with law enforcement officers to stop others from being trafficked.

God of compassion, we pray for all of the women and children who have been trafficked and are vulnerable to being trafficked. May they have protection, support, and wholeness. May they regain their voices and their lives. God of justice, we also pray for those who prey on vulnerable people and exploit and deny them their freedom. We pray for those who buy and demand sex from trafficked persons. May their hearts be truly changed and their eyes opened. May they repent for the pain, trauma, and loss that they have caused. May your justice and healing flow. In your name, we pray for the millions of people deeply affected by human trafficking. Amen.