Honour 150, presented by Canada Life, recognized 150 people from across  Manitoba who stood out for their role in making Manitoba such an amazing province.

Nominated by people in their own communities in 2020, Diane Dwarka – Past President WICC Board, was one of 150 individuals selected for the province’s 150th-anniversary honour.  Congratulations Diane! Please read Diane’s write-up below or go to https://manitoba150.com/en/programs/honour-150/#top. For a list of other awards given to Diane, please click here. 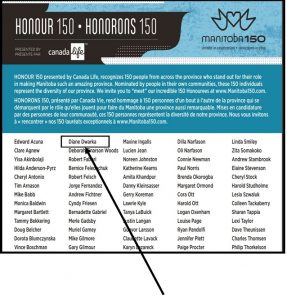 Making Winnipeg a more equitable place for all

Diane Dwarka is a life-long volunteer. After moving to Winnipeg in 1981, she started teaching Sunday School at the United Church in St. Vital. Her commitment to serving others hasn’t stopped since.

Dwarka, originally from Trinidad, says she was taught from a young age to give back.

“I’ve learned to not be surprised when my wife or daughters announce they ran into Diane at one of their events,” says Rev. Dr. Gordon N. Taylor. “She’s virtually everywhere!”

Dr. Algernon C. Karim, her Manitoba 150 nominator, says Dwarka’s efforts have broken down barriers in the city and opened up pathways for others to follow, such as when she became the first non-lawyer to be elected president of the Community Legal Education Association.

When she’s not operating in official roles, Dwarka is still helping out. She volunteers at the Canadian Museum for Human Rights where she assists visitors and helps onboard new volunteers. Since the museum opened in 2014, she has put in more than 1,200 hours of her time.

Throughout her years of service in Winnipeg, Dwarka says her vision is still the same.

“It’s about making the city a better and more equitable place for all.”

One comment on “Honour 150 in Manitoba – Diane Dwarka, WICC Past President”