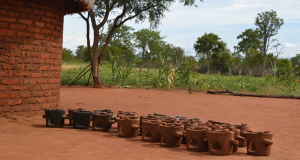 According to the World Health Organization, 4.3 million people a year die prematurely from illness attributable to household air pollution caused by the inefficient use of solid fuels. Most were related to Acute Lower Respiratory Infections (ALRI). There is also evidence of linkages of household air pollution to low birth weight, tuberculosis, ischemic heart disease, cataracts, asthma, as well as nasopharyngeal and laryngeal cancers. Given that young children and adult females are in cooking areas more predominately than other family members, there is greater concerns for their related health.  For example, in 2012, 534,000 global deaths for children under the age of five were related to indoor air pollution.

In Zimbabwe, 73.9 per cent of households use solid fuels as the primary source of domestic energy to cook. Noting some of the ways to reduce air pollution – as well as children’s exposure to it in the first place – UNICEF urged governments to:

In 2015 / 2016, UNICEF Zimbabwe conducted two programmes on the use of improved cookstoves which are cleaner, emit less smoke, are more efficient and use less wood with GOAL Zimbabwe. These programmes were conducted in Hurungwe and Mwenezi. Through these projects, women learned to build the stoves themselves, and then went on to train ten other women within their community, and in some cases more.

The resources to make the stoves are free and locally available, and their impact is both reducing deforestation and respiratory problems. There are significant health, environmental and economic reasons for the adoption of improved cookstove technologies. Firewood/fuel savings, reduced cooking time, reduced costs for the health sector, increased forest conservation and reduced emissions are some of the additional benefits.