By Mary Nordick, WICC Board member living in Saskatoon. 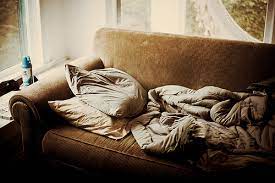 Surfing:  What images does this word conjure up for you?  Blue skies, an expansive ocean, bronzed athletic, graceful bodies skilfully riding towering white curling waves to a sun-kissed dazzling white beach, Beach Boy movies and songs, carefree idyllic summer living?  Or maybe you live with someone who hogs the remote and constantly channel surfs.

However, there is another meaning for the word surfing, a not so pleasant one: “couch surfing”.  “Couch surfing” in the context of homelessness refers to people who temporarily live with friends or relatives, moving frequently, hence “couch surfing”.  Many couch surfers are young: teenagers trying to escape intolerable abusive or alcoholic environments, students whose limited funds cover only tuition, food, and books, or young unskilled workers whose part-time jobs can’t pay the rent.  But not all couch surfers are young; some are older, for example, older women, often single mothers who raised kids on low-paying pensionless jobs and who now sleep on their kids’ couches.

Do “couch surfers”, part of the so called invisible homeless, live in your community?  I would bet that they do.  So, what can we do about the problem of homelessness, visible or invisible?  Providing shelters or working at them is one thing, a concrete and necessary example of charity, of love in action.  But there is another level of action needed as the following story, which I originally heard through Development and Peace, illustrates.

People were noticed floundering in a swift flowing river.  Others rushed to their aid and pulled them out.  Each day the number of people in the river increased and the people on shore worked harder and longer to save them, desperately pulling them from the river.  Then one day, a woman left the rescue operations and started walking upstream.  When asked where she was going and why she was abandoning the drowning, she replied “I’m going to find out why the people are falling in the river or who’s pushing them in”.

We need to give practical assistance and to advocate for change to systems that perpetuate poverty and homelessness.

Note: The following quote is attributed to Desmond Tutu: “There comes a point where we need to stop just pulling people out of the river. We need to go upstream and find out why they’re falling in.”

3 comments on “Invisible Homelessness & Our Approach”