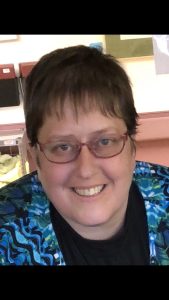 Written by Janet MacFadyen with intro by Cath MacKeil

At the recent WICC Annual General Meeting, Steph’s term as WICC President was completed. Her two-year leadership period happened during COVID and the Board was unable to gather in person. We appreciate how Steph used her gifts and skills to create an amazing virtual Board team. Thank you for connecting us from coast to coast across Canada in a special way!

Many readers of We-Connect were first introduced to WICC Board Past-President Rev. Steph McClellan in the March 2020 edition.  She wrote: One of the many blessings that I have received being a part of the Women’s Inter-Church Council is the discernment, encouragement and calling forth of my specific God-given gifts of creativity and leadership. Exemplifying the latter is one of Steph’s projects that continues to bloom:  Kids Pray Too!

Steph was also an enthusiastic contributor to all the Board teams including FLC, WDP and Personnel, the latter for which she helped update the Employment Handbook. The scripture that comes to mind for Steph as she works together with others is a familiar one – Micah 6: 8 – “What does the Lord require of us? To do justice, love kindness and walk humbly with our God.”

Steph’s current pastoral charge is Bloomfield-Musgravetown in Newfoundland. Her dog, Roxie, is a “star” of the community and enjoys participating in Steph’s ministry. In March 2020, Steph recounted how she became involved in WICC when she arrived on Canada’s east coast to assume her first position as an ordained United Church minister: “Whether by active leadership participation or as a member of the congregation, World Day of Prayer services have always been inspiring. I met Inez Penney soon after I arrived in Newfoundland and heard all about her work as the Newfoundland rep for WICC regarding WDP and FLC. The work and the grant program intrigued me, so when her term was up and she asked if I would be interested in the role, I was more than pleased to put my name forward to the Nominations Team.”

Thank you, Steph, for your compassion and faithfulness during your time of front-line leadership on the WICC Board.  We will continue to look to you for advice in your role of WICC Board Past-President and as one of two CANA (Caribbean and North America) representatives of the executive group for the World Day of Prayer International Committee.  Many blessings to you in all your future endeavours.

One comment on “Message of Thanks to a Special President!”