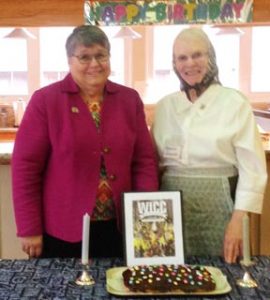 The annual Time of Sharing and Reflection was held at Rideau Park United Church on October 27, 2018. Host churches for the WDP for Slovenia were convened and publicity was made at large as we were also celebrating the 100th anniversary of WICC.

We were pleased to accommodate a visitor from Hudson, Québec who shared that she had seen the advertisement on the WICC website. Having attended WDP celebrations as a child with her mother, she wants to promote the March celebration in her community.

We started with the Fellowship of the least Coin Ingathering Service: “Stand Up for Human Dignity’’. Followed a viewing of videos from the website. All attendees appreciated learning about the WIC grants and the 100th anniversary. We also took the opportunity to preview the 2019 Slovenia video that was equally well received.

Celebration of the WICC 100th anniversary followed. We enjoyed a time of fellowship sharing birthday cake and refreshments. It was also time to view the displays of previous years and view the new one for Slovenia. We appreciate the wonderful resources provided by the national office. The Bible study period is always one of the highlights of the day. It is an opportunity for an ecumenical sharing of ideas and experiences.

We ended the morning with the distribution of the WDP service materials for 2019 Although the Slovenian embassy declined our invitation to participate, they provided us with a tourist map of Slovenia as well as a tourist brochure promoting sLOVEnia:”Love Connects Diversities” for each host group.

We want to honour some deep and diverse roots

We don’t have any information as to when the Ottawa Women’s Inter-Church Council or World Day of Prayer (WDP) actually began in Ottawa. However, Ruby Elver (Anglican) remembers attending WDP services with her mother when she was just a child. Ruby is now in her early eighties and has been our treasurer since 1995. Some former presidents of our regional council: Jean Lafferty and Lois McCarthy (Roman Catholic); Barbara Faught (United Church); Rosalie Alexander (Baptist); Lise Gauvin (Roman Catholic).

We have had two members who reached and passed their hundredth birthdays, namely Margaret Williams, Anglican; and Mae Linkletter, The Salvation Army. Others who served on our committee for many years were Isabel Greenwood, Anglican; June Fawthrope, Baptist; Joan Mulligan, Roman Catholic; and Vae Rankin, Presbyterian.

One year, June Dyer, then president of WICC, attended our “Time of Sharing” and was our special guest speaker. The year the theme was Young Woman, Stand Up. a talented teenaged Jewish girl was suggested to us by some volunteers for UNICEF to serve as our speaker. She gave an excellent presentation.

What happens when you change the time of your service

Our WDP services are usually held on the First Friday in March, either in the afternoon or in the evening. However, in recent years much more flexibility has been evident. One service was held on a Friday at 4:30 p.m. so that teenage high school students who were members of the host church’s drama group would be able to participate in the service. This was followed by a light supper in the church hall. Several churches have hosted noon hour or 1 o’clock luncheons following WDP prayer services. The suburban church that first tried this had a large number of husbands present as the wives brought them along to the service and then they all were able to enjoy a delicious lunch together afterwards. Others who held noon services so that downtown workers could attend, were very happy to have men make and serve several varieties of soups. A gifted gentleman even baked the bread for one of these lunches. Other services have been held on Saturday mornings, Thursday evenings, and once even on a Monday, this being the only day when the church facilities were free. One year a service had to be postponed a week because a Farmers’ Protest of slow moving tractors on their way to Parliament Hill was scheduled to pass by during the host church’s original service.

How we are leveraging local assets

Being in Ottawa offers us opportunities to make contact with the many embassies and high commission offices located in our city. The response from the majority of them over the years has been very much appreciated. Some have provided speakers for both our “Time of Sharing” and for various WDP services themselves.

In some cases, the response from several of these embassies has been quite overwhelming. One group planning to serve tea and cookies after their WDP service was amazed when the embassy (located nearby in their neighbourhood) decided to bring in their kitchen staff and provide a very delicious “supper” for all who attended the service. Skilful dancers in costume at one of our Days of Sharing were a huge cultural hit. Another of the High Commissions had a large basket of articles from their country delivered to us. At our Day of Sharing event their representative led us in a parade as we followed her (she carried their flag) up to the front, each of our members carrying one of these lovely items that were then displayed on the worship table.

We used to hold WDP services in nursing homes and even in hospitals. These were led by dedicated persons who worked in these places. However, we can no longer do this.

One of our members, Ruth Wright, prepares marvellous and attractive displays each year, telling all about the focus country. She also enjoys helping people to dress up in appropriate costumes. We have been privileged to have liturgical dancers, drama groups, choirs. panels and interviews, all of whom have added to our worship experiences over the years.