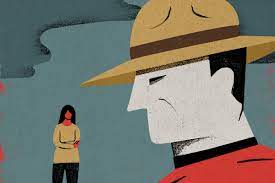 Two years ago, “Reclaiming Power and Place: The Final Report of the National Inquiry into Missing and Murdered Indigenous Women and Girls” was released in two volumes.

One year ago, Chantel Moore, a young woman from the Tla-o-qui-aht First Nation, was shot by a police officer in Edmundston, New Brunswick after being called to her residence for a wellness check. Police alleged that Moore had a knife and “threatened an officer”, who then fired five times, killing Moore. However, investigators have not released details of the nature of the alleged threat and Edmundston police officers do not wear body cameras. The RCMP Commissioner, told the family “it is very clear to me that the RCMP could have done better and I promise to you we will do.”

Both Indigenous and Black people are overwhelmingly overrepresented in police-involved deaths in Canada. Between 2007 and 2017, Indigenous peoples represented one third of people shot to death by RCMP police officers (Mercer, Fiddler, & Walsh, 2020). The Ontario Human Rights Commission found that a Black person was more than 20 times more likely to be shot and killed by the police compared to a white person (Ontario Human Rights Commission, 2018).

Police & Racism is a large topic, and WICC board member Mary Nordick offers the following thought-provoking piece for our reflection.

Police, a word:  what does it mean?

The Oxford English Dictionary says “the civil force of a

But what does this word mean to people;

what do they think or see?

rescue, a helping hand, someone to trust.

Keep our streets safe, let us sleep in peace, finder of the lost,

Women and men who in one week may

see more of the dark side of human beings than others see in a Lifetime.

no longer relevant, not to be trusted.

If police are representatives, upholders, and protectors of society

If and/or when police are racist

What does that say about the society they serve?

Lord, continue to deliver insight and wisdom to those who have chosen to serve as protectors of society. May there be safety and security for all.