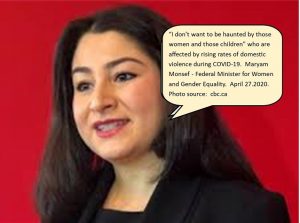 Statistics reported by the Canadian government and Department of Justice over the last ten years consistently support our concern.

Current concerns: In late April, Minister for Women and Gender Equality Maryam Monsef said that the COVID-19 pandemic has exacerbated the plight of women and families experiencing domestic violence. York Region, for example, reported a 22% increase in domestic incidents since stay at home measures were invoked. (York Regional Police, April 20, 2020)

We invite all readers to examine our online resources which can be helpful for addressing this urgent concern.  An introductory podcast to RESTORE: Ending Violence Against Women hosted and created by Cath MacKeil and Carol Penner, was announced in December 2019. Go to https://wicc.org/restore/ to explore all related materials.

Note: Carol Penner, Ph.D., is an assistant professor of practical theology at Conrad Grebel University College in Waterloo, ON.