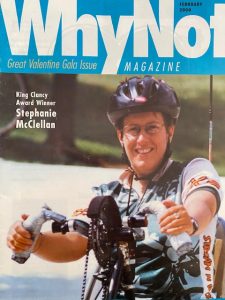 So I wheeled across the country on the strength of my arms, not to make me look like a hero, but to help people recognize the abilities of people with disabilities – bringing more awareness to public attention. Antigonish, Nova Scotia understood the purpose and meaning of our journey.

The United Church in this town hosted a workshop that we led in each community where we stopped for the night along the tour. The town had invited every organization in town to attend. The hosts knew that we wanted to be in contact with people with disabilities and that we wanted to bring together church people and community groups who would be able to meet and speak about how they could be more open to each other’s goals and needs. During discussion time, we found out there was a vibrant disability drama group in Antigonish. People at our event knew of them and enjoyed their artistic gifts. However, the building that the drama group had been using had just been sold and they were no longer able to use that space. They were homeless. They no longer had an accessible space where they could be on stage together. As we talked, the United Church folks looked around and said, “Well, we’ve just done a lot of changes within our United Church building and one of the things that we did, and not because we had any plans for it, was that we made our stage and our auditorium completely wheelchair accessible. Why don’t you come and do your drama group at our church?”  It was an amazing opportunity!

When we set off on this tour in Vancouver we left on ‘wings like eagles’ and we hoped that the communities that we stopped in would learn how to soar together. We hoped that we would be able to be a catalyst – sparking conversations, and then before moving onto the next place, leave in our wake groups that would be able to dialogue together about accessibility. This drama group found a place to be and to belong, and the church found a mission because they had followed God’s lead and made their space accessible.

I’ve been an advocate for disability awareness since I was 19 years old. That’s the year that I learned about hospital life and disability on a personal level. Prior to that I was an able-bodied athlete, and I hadn’t been knowingly touched by disability, but once I felt it, once it came into my own life, I understood much more clearly what it meant to be a person with a disability, and I understood what it meant to be an advocate. I didn’t have a choice. I used a wheelchair for about 20 years so simply by being anywhere, I was an advocate. I was someone whom people would ask questions of. I was someone who showed up as different.

When I was 19 I thought I had the world by the tail and in response the world turned around and bit me. I often say now that it was the only way God could get me to sit still long enough to listen. Interestingly, the only disability that I had considered in life was deafness, and I had always dreamed of being a teacher of the deaf. At four years of age, I started to learn sign language. When I was nineteen, after my first year of university and exams, I was going into a summer with three part-time jobs. Within a month of being home, I was on bedrest. I couldn’t move: not my mouth to chew nor the rest of my body to do the things that I needed to do for my own daily care. I was on bedrest for seven months and we (my family and health team) didn’t know why. After seven months, the diagnosis of rheumatoid arthritis was made.  It was finally showing up in the marker on my blood work and we knew what we were dealing with … sort of. After those seven months, I was in rehab for five months learning how to walk and stand. I used an electric scooter until I found out about wheelchair sports. Basketball, skiing, hockey, and endurance training were no longer lost to me. I needed to change positions from standing to sitting. My world opened up again and I trained hard to use a manual wheelchair. Every day, I felt the need to succeed in life, and I needed to be an advocate in this new world of challenging access and people’s ignorance. I spent most of the time, and sometimes still, find myself working twice as hard to be thought of as half as good. When you have a disability you must work harder at getting people to see the gifts that you have instead of all the disabilities that manifest themselves.

Part 2 of Soaring over the Barriers of Ableism will be featured in the December edition of We-Connect.

2 comments on “Soaring over the Barriers of Ableism”