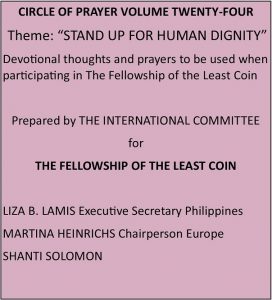 Fellowship of the Least Coin – Prayers

Note: We-Connect is sharing prayers and authors from the Circle of Prayer Volume Twenty-Four prepared by the Fellowship of the Least Coin’s International Committee

Stand Up for Human Dignity by Farhana A. Nazir, Pakistan

we do not know what to pray.

But O God, we trust that your Holy Spirit intercedes

for all those who are weak and oppressed.

Bind us women of prayers

and strengthen us in our journey

to your reign of justice, peace and freedom.

Dignity is a “sense of gravity that invites reverence” – what God has transformed to all. The call to ‘Stand Up to the Dignity’ is a way to remember the equal status of man and woman who are created in the image of God (Gen. 1:27), to share equal gifts and respect. However, our practice reveals a different understanding. Historically, killing the man; but leaving a woman alive (Ex. 1: 15-22) had been regarded as “killing the power and leaving the weak to live”.

The case can be different where a weak can become a power. Historically, in South Asia a woman’s strength was regarded less loyal and weak to work in the Church Mission. However, it was difficult for man to bring the powerful gospel to oppressed women and children. Significantly, in Pakistan between 1885 and 1910 was the expansion of the Zanana Mission (zan, means woman, and anna means room) which worked within the cultural system allowing women to bring the gospel to the oppressed, through home education and medicine in her weak health conditions. What women have done in history was just like following Jesus and saying that “the Spirit has anointed me to proclaim and bring good news, freedom and light to the poor and oppressed (cf. Luke 4:18-19). By doing such great work, a woman becomes “…a little lower than the angels…crowned… with glory and honour” (Psalms 8:4-6).

Unfortunately, in contemporary Pakistan, women, along with other religious communities, still face many issues such as honour killing, brutality, disloyalty, untouchability and unequal status. Many Christian women suffer seriously. An example was Aasia Bibi, a Christian and mother of five. In November 2010 she was alleged to have committed blasphemy after drinking water from the same glass D 12 with a Muslim woman. She was jailed and was sentenced to die. She is still in jail and there is little or no hope for her release.

Little girls can also be accused of committing blasphemy like 11 year-old Rimsha Masih, an illiterate Christian girl with Downs Syndrome, who was accused on 16 August 2012. She was forced to leave the country and is not welcome any more.

Many have lost their dignity, freedom and equal status from our society. Who will bring freedom to the oppressed? Who will protect life and dignity of humans? Such situations call on the women of the world to “Stand Up” and pray for women of Pakistan.