WICC provided a WDP grant of $1600 to The Church Council on Justice and Corrections to cover the cost of professional IT skills in order to make the Justice Storytelling Quilt accessible as an online, interactive, multi-media presentation.

About the quilt design: Each patch is a symbolic descriptive image produced by victims and offenders from across Canada. There are 40 blocks with 13 stories in French and 27 in English.

A note from the CCJC: The purpose of the Quilt is to bring us together so that we may empathize with the suffering, hope and courage of victims and offenders. May this Quilt inspire us and give us courage to talk about the sorrowful events in our own lives.

Go to ccjc.ca: A click on any patch will activate a two minute audio testimony by its designer, describing the sorrowful event that took place in his/her life.

One of the 40 quilt block stories is shared below. 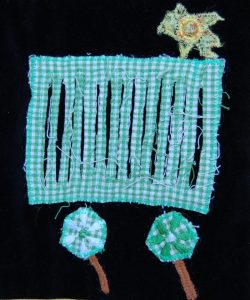 14:  No matter what, I’ve always been a star. I started out small and life was hell which kept me small. Then I started to get bigger and now I got backbone!

I told my mom when I was 11, that it was going on. She actually woke me up in the middle of the night one night and asked me if it was happening; I told her “yes”. Then the next day the two of them called me downstairs and apologized. It had been going on since I was four, since my mom married him when I was four years old and it started right away. And they said that it wouldn’t happen anymore. It continued on until I was 16. I knew that when I took a shower I had to get out – I couldn’t put anything on because he was going to sexually abuse me. Once I was 16, I met my knight-in-shining armour. She just seemed like somebody that I wanted to be my mom, so I gave her a really hard time with it, to get kicked out of her class. And then I told her that I was ready for her and I’d tell the guidance counselor. So we went to tell the guidance counselor. She phoned the police, and Family and Children Services right away. Randy was charged and it didn’t go to trial because he pleaded guilty. My mom found out that his best friend had abused me as well and she said that it wasn’t fair that I was charging my stepdad but not charging his best friend. And he pled “not guilty”. So I had to go to trial with him and fight. And it was my word against his, and he had all of these witnesses saying that he was this wonderful man and I had nobody – it was my word against his, right? It was one of the worst experiences of my life: being on the stand, and being questioned by his lawyer. Tom was found guilty (that’s his best friend). He got sentenced to a year in jail, but got out in three months. My stepdad got sentenced to five years in jail, with one year being consecutive – someone else had charged him, as well. He was out in 2.5 years. She’s still with him today, still sleeps with him. I am 27, going to be 28 in November. I’ve never dealt with my mom until the last couple years. She told me that she decided that she was going to stay with Randy because I had a whole bunch of support and he didn’t have any. I have to accept that she chose to be married to him – she’s still married to him. There’s nothing I can do; she’s never going to leave him. I don’t know if I will be able to forgive him for what he did to me. I actually have more hatred towards his best friend who was raping me over and over again. It wasn’t like, fondling or just some oral sex or anything, it was forcefully raping me every time it happened.