The Division of Foreign Missions, on its part, distributed the WDP-services “overseas” and collected reports from around the world. The women at the Foreign Mission Conference also combined love for the Day with their knowledge and understanding of women of other countries and with their worldwide connections. By the mid-1960s, they sent the service to around 1,000 addresses in about 145 countries. Today, we can hardly imagine how all this work was carried out only through mail and an amazing amount of correspondence.

In 1964, one of the UCCW organizers said: “Since this has been a Day that has been observed on a truly worldwide scale for 40 years, the rest of the world should have a part in deciding its course. Modern means of communication and travel now make it possible for us to come together to plan.”

Now, every five years, representatives from all the World Day of Prayer International countries come together. Cath MacKeil, our WICC executive director, and Lauren Wilks, WICC Liaison to WDP at that time, attended the 2017 event in Foz do Iguaçu,  Brazil, and met WDP leaders from 125 countries.  The next international meeting will be held in Scotland in 2022.

At these international meetings, all countries are invited to submit an application to be considered as a WDP host writing country. Cath notes that there were probably a dozen applications in 2017 as it is also a lot of work for the host country.

An international executive team then prays and discerns together before the next five writing countries are chosen. Themes are selected in a similar way, and then matched to the chosen countries. It is a process that takes days, and we trust that the Holy Spirit guides the decision makers.

Beyond the international gatherings every five years, there is an international committee for World Day of Prayer whose bricks and mortar headquarters is in New York City.  Their website – worlddayofprayer.net –  provides interesting history snapshots including the evolution of the “rules” for World Day of Prayer services (1968 was a key year).  This group ensures that WDP materials are sent to countries at least a year in advance of the service. 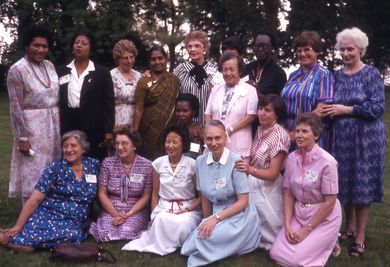 In Canada, we will be soon preparing the England, Wales, and Northern Ireland (WDP 2022) resources for our website – wicc.org, and are excited about the service and the theme. A Women’s Inter-Church Council of Canada board committee reviews all the written items received to help safeguard and support our ecumenical base. Country information will be posted on the website later in the spring.

Written with files from worlddayofprayer.net and a summary by Cath MacKeil