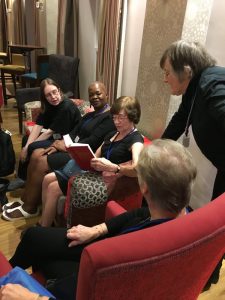 As a single World Day of Prayer organization, the three voices of England Wales and Northern Ireland, have come together to present the 2022 service, recognizing both differences and common ground.

In 1928, at the International Missionary Conference in Jerusalem, Scotswoman Grace Forgan first learned of the World Day of Prayer and brought the news to the United Kingdom. The first service was held in 1930 in Scotland; followed by England in 1932, Wales in 1933 and Northern Ireland in 1943.

The first services in England were held in the London area and the wave of prayer moved across the south of England to Wales. In those days, travel was not as easy as it is now so it was more sensible for the women of England and Wales to set up their own National Committee rather than unite with Scotland. It was not until the reforms of the second Vatican Council that Roman Catholic women were able to take a full part in the day of prayer and in 1967 the day was celebrated at a special service in Westminster Cathedral, by invitation of Cardinal Heenan.

In 1969 the World Union of Catholic Women’s Organizations encouraged Roman Catholic women worldwide to participate in WDP and to make this possible WUCWO moved their own day of prayer from March to May.  In 1982 the service was prepared by the women of Ireland, both north and south.

It should be noted that the second World War brought women closer together in prayer.  They preserved through the strife. In 1941, for example, the WDP office in London was bombed and all property and records were destroyed. There was no loss of life and minutes recovered from members enabled the bare bones of the first 9 years to be preserved.

Currently, the WDP National Committee includes 18 different Christian denominations. They allocate over 40 grants to national and international charities. They continue to review what they do and to adapt to changes in communication and technology. Their office in Tunbridge Wells coordinates the distribution of service materials, including activities for children and youth and their website carries news of all they do. In response to what they saw as a need to involve younger participants, their WDP now organizes an annual Y Pray? event in May, when younger women are encouraged to join them for a weekend of prayer, fellowship and entertainment.

For the worship service program, WDP England, Wales and Northern Ireland provided the Lord’s Prayer in the Welsh language. Click here to view the spoken word video of the prayer provided by the WDP Welsh Committee.

One comment on “The World Day of Prayer Committee for England, Wales and Northern Ireland”