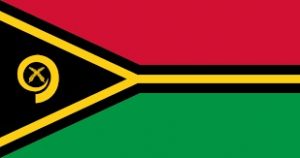 Vanuatu is the host country for World Day of Prayer 2021. Here’s an opportunity to learn about this country.

At the first South Pacific Games in 1963 a team from the New Hebrides, now Vanuatu, displayed a flag of blue-yellow-white vertical stripes with a central emblem. Later, political parties developed flags of their own. In 1977, one of these, a flag of almost the same colours and symbolism as the future national flag was designed by local artist Kalontas Malon and adopted by the Vanuatu Party. Following minor modifications, it was hoisted as the national flag on Independence Day.

Other information about the Vanuatu flag: Black represents the Melanesian people that originally settled in the islands. Red symbolizes blood of the boar and warriors.