Thank you! Our 100th Anniversary in Lindsay was extra special because this small Ontario town is where the first national interdenominational women’s day of prayer took place on January 9, 1920. See more about our history in a companion article, “World Day of Prayer: The Canadian Connection.“

Forty-four women of several denominations gathered at an ecumenical retreat to celebrate 100 years of prayer and action through the Women’s Inter-Church Council of Canada. From the organization’s humble beginnings in Lindsay, Ontario, women have continued to gather and pray for social justice and for each other. As well, they have been praying for people around the world on the first Friday of March each year when they celebrate World Day of Prayer in over 100 countries. Keynote speaker Cath MacKeil, WICC executive director, took us on a video journey through WICC history and shared with us some of WICC’s current grant stories. The sale of WICC’s Awakening prints helps to finance projects for Indigenous women in Canada.

Anne Taylor, cultural archivist of Curve Lake First Nation, shared many stories and brought to light much information about her people and some of the challenges they have faced and are still facing. In a very informative video about the 1923 Williams Treaties, we re-learned some of Canada’s history from the viewpoint of the Indigenous people in our neighbourhood. We also learned that a community within 60 km of Lindsay has lived daily with unsafe water and boil-water restrictions for many, many years. 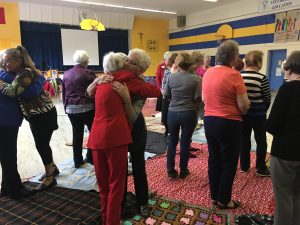 Anne and Catholic Women’s League member, Donna Moore, led us in the Kairos Blanket Exercise which brought many more historical facts about the settling of Canada to light. The day concluded with a smudging ceremony.

Women who attended were encouraged to initiate action on the unsafe water and the rewriting of Canadian history, especially for our schoolchildren.

One comment on “WICC 100th Anniversary Celebration in Lindsay Ontario on Saturday September 29, 2018”