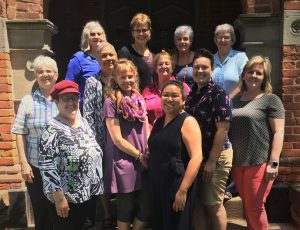 Here are some highlights from Diane Dwarka and her President’s report:

“As we reflect on the past year, we will note that we have accomplished much as a women’s organization.

We experienced the joyous spirit of celebrating 100 years of growth and fellowship and moved into a new centenary with hopes held high for a better future.  What does the future hold? It is my hope that we see continuous growth and excitement.

We said goodbye to a few members and welcomed new members under our newly structured Board. This year has been a transition year as we moved from being a Council to becoming a Board with every Board member being a valuable player on various Teams.

Our programs, World Day of Prayer and Fellowship of the Least Coin, continue to give grants to women around the world as we seek “to bring hope to women touched by injustice.” We also promote the Thursday’s in Black worldwide initiative that seeks end violence against women.

The theme of next year’s World Day of Prayer says: “Rise, take up your mat and walk”. Let us learn more about how that applies to each of us and put that into practice.

As we move into a new year, let us continue to support each other in prayer. Let us remain “rooted in prayer” as we seek justice for women and girls touched by injustice.”

Here are the board members and responsibilities as of November 2, 2019

Shirley DeMerchant, Past President for the WICC board has completed her term but she will continue to be an active member of the MarCom Committee.