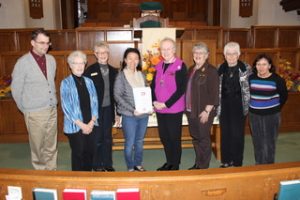 The seeds of shared work for missions were sown in 1812 by Mary Webb, an American Baptist in Boston who called for shared days of prayer for missions. By 1818, 97 women’s missionary groups were on board. Momentum was also gathering in Canada.

On October 19, 1918, a woman named Bessie McMurchy invited representatives of five women’s missionary boards—Anglican, Baptist, Congregational, Methodist, and Presbyterian—to meet together to “promote the spread of Christ’s kingdom by united prayer, united action and a stronger voice in national questions.” Her letter led to the formation of the Inter-Board committee of the Women’s Missionary Societies.

In Canada, a suggested worship outline was prepared by a small committee and printed in the Women’s Missionary Society magazine and also distributed by each board. The first offering was enough to provide $100 for Christian literature, $150 for the China Famine Fund and $141.98 for expenses. In 2018, over 75,000 Canadians participated in World Day of Prayer services across the country and, through their offerings, helped WICC fund 20 projects that touched the lives of 10,729 people. Our grants promoted maternal, newborn and child health in Guatemala; supported women caring for HIV/AIDS orphans in Kenya; helped work in Cameroon to end female genital mutilation; and promoted inter-generational programs, food security, mental health and ecumenical activities right here in Canada. 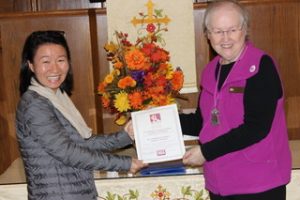 Reverend Linda Park of St. Andrew’s Presbyterian Church in Lindsay, Ontario received a certificate of recognition from WICC on behalf of the church.

If you want to know more about the international movement, the World Day of Prayer International committee have assembled the history on their website.)