For 29 years, Ratanak International has been breaking Cambodian cycles of poverty, exploitation and abuse. They prevent the latter, and protect the victims, by working collaboratively to equip citizens with the skills they need. As well, they help the Trafficked return home and preserve Restore survivors with love. 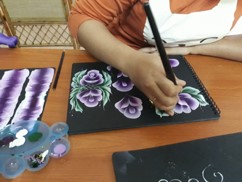 Ratanak International started a transitional home for trafficking survivors in 2012. During a three to six month period of trauma recovery in 2018, 81 women received support. Of these, 69 transitioned back into their communities. Below are highlights from VT’s story:

Due to mounting family poverty, VT agreed to marry a Chinese man. It became a brokerage situation where she was sold for $2000. While this money was sent to her parents for economic relief, she was abused by her buyer for over a year. Eventually, she jumped over a wall and made it to the Cambodian Embassy. While nervous and fearful in the early days at the Ratanak transitional home, her confidence returned. VT has since acquired hairdressing skills and saves to open her own shop within 4 years.

The WDP grant was targeted to develop vocational skills for the young women. Successful integration into communities with survival independence very much depended on an ability to earn money.