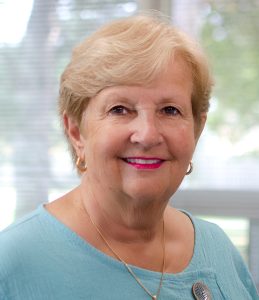 Brenda Halk has represented the Canadian Baptist Ministries on the Women’s Inter-Church Council of Canada (WICC) Board since 2021. Her connection to WICC started thirty years ago when, as a young mom, she was asked to lead two World Day of Prayer services in Waterloo.  Two years ago, Brenda reconnected with WICC to assist a Filipino organization to apply for a World Day of Prayer grant.  This knowledge became valuable as Brenda is now a member of the WICC grant review team.

Brenda knows her home city very well.  She was born in Waterloo and has lived there for her entire life.  In the 70’s, Brenda graduated from Wilfrid Laurier before spending a year at Western’s teachers’ college.  Over a twenty-year period, between periods of raising her own children, Brenda taught school, often through special education.  Brenda was also active for twenty years in business as she worked in partnership with her husband in three manufacturing businesses including the making of leather work gloves.  Now Brenda plays a key role with Canadian Baptist Ministries (CBM) working within CBM’s International Partnerships Team and the organization’s global church partners in the areas of gender-based programs as well as Faith and Work Initiatives. Her work in gender based ministry involves equipping women to become effective agents of change at home, in the church, and within the wider community.

Brenda co-leads the CBM’s Faith + Work initiatives both in Canada and globally, which promote the integration of faith and work.

For all, there is a focus on sustainability and community development.

When deciding on membership with the WICC board,  Brenda consulted with the Canadian Baptist Ministries as she would be representing this faith group.  WICC was regarded as a valuable ecumenical organization, and WICC’s vision statement: Restoring Hope to Women Touched by Injustice especially resonated as it aligns very well CBM’s focus on justice.

Brenda has six granddaughters and one grandson.  She comparatively looks ahead and realizes that the girls’ lives could be different from other women who don’t have voices and feel oppressed.  The advocacy of WICC, and their commitment to providing resources such as Restore inspires her.  The impact of church women from across Canada, representing ten ecumenical voices, speaking with one voice, is powerful.  There is a realization that justice for women is imbalanced and needs to be addressed.

Brenda finds opportunities to discuss WICC.  In Kitchener/Waterloo, the Children’s Need Distribution Centre wanted to provide car seats to single moms.  This group, which is funded by donations,  was having COVID related difficulties in fundraising.  By applying for a WDP grant to assist with their empowering project, they learned about WICC.

8 Speak up for those who cannot speak for themselves, for the rights of all who are destitute.

9 Speak up and judge fairly; defend the rights of the poor and needy.