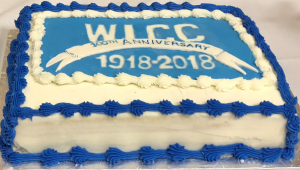 The Women’s Inter-Church Council of Winnipeg (WICW) wrapped up WICC’s 100th Anniversary celebrations, which began in Newfoundland in March, with a brunch at the Canad Inns Winnipeg on Saturday, November 3.

We had representation from twelve faith groups and greetings from many including the Lieutenant Governor of Manitoba, Janice Filmon.

The gathering included all ages from 2 years to 102 years. Our 102-year-old attendee is herself a life time member of the United Church Women and still rides her scooter to church so long as there is no snow on the ground.

A special presentation, “WICC works in the World,” written and directed by one of our members, Alvina Koshy, and performed by children and grandchildren of members highlighted some of the grants awarded by the Women’s Inter-Church Council of Canada (WICC) that make a difference in various parts of the world. Emphasis was on the importance of water, the purchase of goats, and the need to Reduce, Reduce and Recycle. The drama ended with an acrostic spelling “WICC 100” and pledging support for WICC.

Our keynote speaker, Rev. Heather McCance, who’s been attending World Day of Prayer (WDP) services since age 8, kept our attention with her focus on the theme: The Joy of Justice. This was followed by a powerful rendition of WICC’s commemorative hymn “In A World Full of Sorrow” by the acclaimed Joie de Vivre choir followed with everyone lustily joining in.

Diane Dwarka, first president of WICC in the new centenary, talked about some of the possibilities for growth in the future. Past presidents and long-time members were presented with certificates for exemplary service. Throughout the event there was a scattering of music beginning with the steel pan played by Patsy Grant’s three grandchildren, Kaylene Olexa and Elijah, a solo by Prince Jackson Nduwayo and other music.

All together an enjoyable day of fellowship was enjoyed by the 149 people who attended (150 if we count the baby). We were surrounded by WICC’s anniversary colours of purple, gold and white.

What a fabulous day, what memories we will carry forward!